At each VEX tournament in BC throughout each season, students have the opportunity to present their robots to competition judges, typically engineering or computer science professionals. Judges interview the teams, and then confirm teams’ statements by watching game-play throughout the tournament.  At the end of each tournament, judges recognise teams for design, creativity and other aspects of robot quality with awards. Two of these awards, the Excellence and Design awards, qualify the award recipient to proceed to the next round (either Provincials at regular tournament play, or Worlds at the Provincials tournament). Other awards include the Amaze award, the Build award, and the Create award. VEX’s descriptions of each of these awards can be found here.

Before we, the judges, get down to discussions about which team (and their robot) have the most creative component or an outstanding design, we evaluate each robot and the design process of the team. There’s four categories, each weighted evenly, that we look to understand: design of the robot and strategy; quality and efficacy of build; application of autonomous tools, and the design process.

Design: The first step in developing an effective design is thoroughly understanding the needs that the design will meet. All too often, this step is glossed over, both by VEX teams and in the professional world. In VEX, this should follow from a gameplay strategy. The judges look for evidence that the team has asked the questions: What goals do we want our robot to achieve? What qualities does it need to achieve those goals?

The design of the robot to achieve each of these goals comprises the largest section within the design component of our evaluation. In this year’s competition, this involves pick-up of game elements, release of game elements, maneuverability of the robot, and in many cases, raising the robot above the ground on a post, a maneuver called “the hang”.

Build: Quality of construction and ability to maintain this construction are essential for achieving success.  We look for teams that have intentionally used particular materials for their highest and best application. We evaluate the robustness of the construction, the effectiveness of the frame build, as well as attention to details such as wiring, and elegance of the overall build.

Autonomous: In today’s world of ever increasing automation, the effective understanding and application of these tools can provide tremendous value. In the VEX game, there is an autonomous-only portion of the game for which robots are designed and programmed. There is also the ability to apply sensors to assist the driver while under manual control.  Credit is given by the judges for both the design (plan and intention) and the successful application of autonomous tools.

Design Process: Engineering work builds on existing knowledge, mistakes of the past, and involves copious amounts of team work. The design process that judges are looking for emulates this real world work. We are looking for teams to demonstrate a professional approach to design and team organization. We are looking for evidence of data driven iterative design that is recorded in a manner such that it could be repeated without further guidance, and a deliberate project management effort refined for project demands and team-specific dynamics.  Both the Design and Excellence awards require a Design Notebook (by official rules), and the awards are always given to a team with a strong design process. 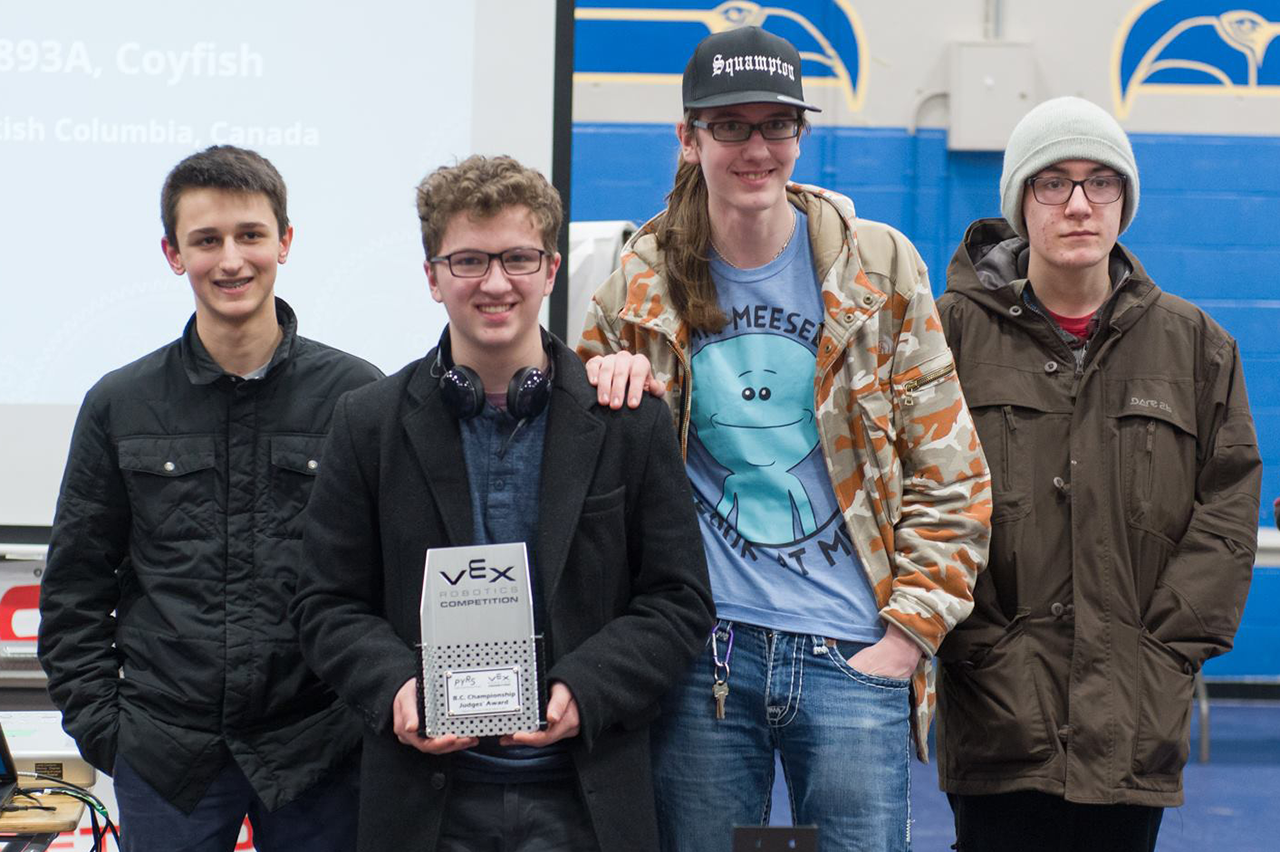 39 BC secondary school robotics teams vied for top spots and an entry into VEX World Championship at the BC Provincial VEX Competition March 1, 2017. The best in BC, teams from the Lower Mainland and Vancouver Island earned spots at the Provincials by finishing first or second in competition play, or by winning the top adjudicated awards.

The bleachers at Seaquam Secondary were packed, as the crowded cheered on the two top alliances, led by Ten Ton Robotics team 1010R from West Vancouver Secondary and Robosavages 2D from Gladstone.  The 1010R Alliance included another TenTon team,1010Z, and  2S RoboSavages. The 2D alliance included two Comox Valley teams, NIDES Navigators 7842D and Byte Me Robotics 50000.  Both alliances fought hard, robots tossing big orange cubes back over the fence as fast as the other team could throw them. Both sides show just how capable a student designed robot can be, but in the end the 1010R Alliance won.   All six teams now head to the 2017 VEX World Championships in Louisville, Kentucky. 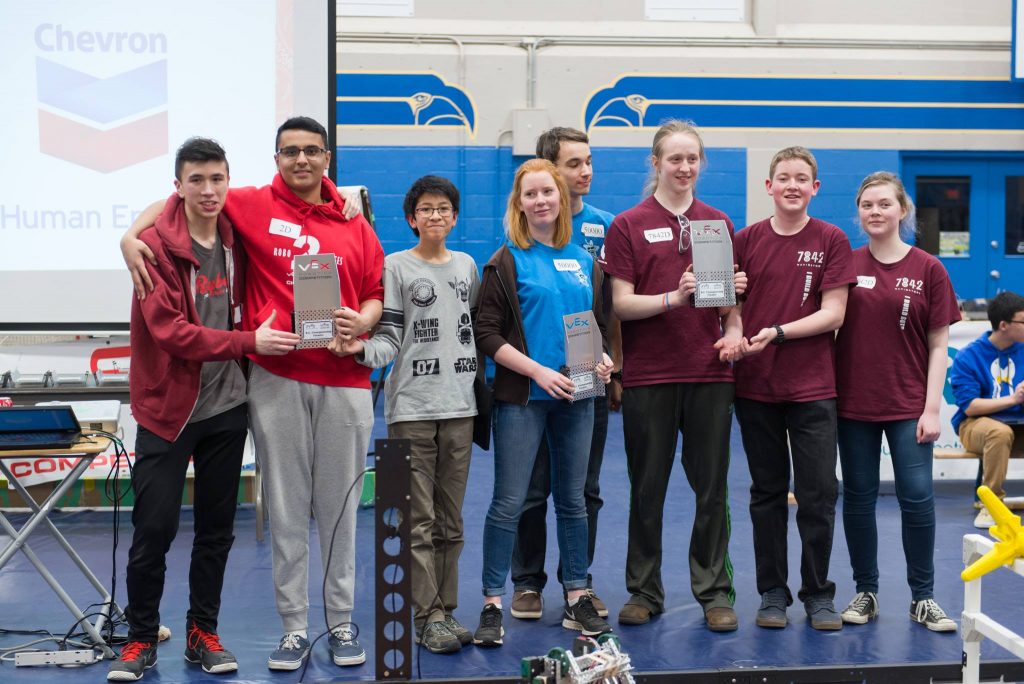 Judges were impressed with the caliber of design, build, and innovation demonstrated by all of the teams competing and recognised 7 teams.  Two of these awards qualify the teams for further international competition.  The Design Award given to Gladstone 2Y’s sends them to Worlds as does the Excellence Award, the competition’s highest recognition, given to Ten Ton 1010X. Watch the final matches – Match 1,  Match 2, Match 3.

Here’s are all of the award recipients:

VEX Competitive Robotics is coming to the BCTECH Summit a showcase of made-in-British Columbia technology, innovation, and entrepreneurship on Wednesday, March 15, 2017.

As part of Youth Innovation Day at the BC TECH Summit, BC high school teams will show off their robotics skills, competing in qualifying matches throughout the day, leading to finals starting at 3:15 pm. Teams competing are from 5 schools across lower mainland and Vancouver Island: Gladstone RoboSavages from Vancouver, TenTon Robotics from West Vancouver, Fraser Heights Firehawks from Surrey, Burnsview Griffins from Delta and NIDES (North Island Distance Education S..) Navigators from Vancouver Island.  View the Vex Robotics Competition Schedule.  The competition fields will be located in the West Foyer by the escalators.

At PYRS, we are really excited about this opportunity. Not only will our students get to participate in the Youth Innovation Day.  They will be able demonstrate to the BC Tech community just how far student designer, builders, and programmers can take a robot, and how much fun they can have doing it.

Educators, governments, and industry all recognise how important it is for BC youth to develop STEM ( science, technology, engineering and math) skills and knowledge, regardless of what career they path they choose. Human Resources and Skills Development Canada (HRSDC) have predicted that almost 75 per cent of new jobs between 2009 and 2018 will be in the STEM fields. But we are challenged to inspire students to participate in STEM learning. For instance, less than half of teens are completing science courses through to grade 12 according to a report published by Let’s Talk Science, a London, Ontario-based organization aiming to motivate and empower youth using the STEM subjects. Competitive Robotics is one way the educators are making a difference.  VEX Robotics turns learning STEM skills into a team sport.  And what’s more, as our BC student teams demonstrate, participating in robotics competitions takes a whole range of skills – from communication,  to leadership, planning, organization and perseverance – skills that our youth need in today’s world,  and skills employers place on the top of their list.

When not competing, students will be able to explore the wide range of education, training and career opportunities in BC’s tech sector. They can talk with local researchers demonstrating their latest technology at the Marketplace and Technology Showcase, listen to inspiring speakers share how technology is changing the world, and gather practical information from all the post-secondary institutions and companies that are hiring the next generation of talent.

Canadian teams rocked this years VEX Robotics World Championships in Louisville, Kentucky. Along with Alliance Partners from around the world, three Brampton Robotics Education teams represented  Canada in the High School Finals. Brampton’s Team Discobots 1104M with their Alliance Partners 8691E,  from Hefei No.8 Senior Middle School, China and 400S from Galveston I.S.D. Robotics, Galveston Texas,  won the Championship.  They had to work hard to win against Discobots 1104Z and 1104G, and Team 1267 Knights, from Delaware County Christian School in Newtown Square, Pennsylvania.

British Columbia was also well represented at the VEX Robotics World Championship in Louiville, Kentucky, with eight VEX teams . There were over 500 teams from 31 countries competing in the High School category. The teams were divided into five divisions.

In the Math Division, BC was represented by 1039A, the Robo-Raiders, from Comox, who finished 6-4, and 9181B, the Seaquam Seahawks who went 8-2 in qualifying and finished as Quarter Finalists and Captains of the #8 alliance.

In the Arts Division, BC was represented by 9594C, Mechanical Synergy from West Vancouver, who finished qualifying with a perfect 10-0 record and were Captains of the #1 alliance. They finished as division finalists, after taking the final to a tie-breaking third match.

In the Engineering Division, BC was represented by 2Z, from Gladstone, who finished qualifying with a 6-4 record and joined two Chinese teams for a run to the division final which also went to a tie-breaking third match.

In the Science Division, BC was represented by 2R, from Gladstone, who finished with a 4-6 record and 6264 from Shawnigan Lake who finished 3-6-1.

Check out the full results here

At VEX Worlds in April Starstruck, the 2016 – 2017 game for middle and high schools was introduced.  This year robots will work to get Stars (giant yellow jacks ) and Cubes (12 inch)  across the fence,  while their robot stays on their own side so the fence.  And of course, there are additional points for a Low Hang or a High Hang at the end of each match.

For scoring and more details,  check out this  Introduction to Starstruck and this Strategy video.